CHICAGO — Animal-free whey smoothie, vegan frittata and cell-cultured blue fin tuna — these foods will all be part of future protein innovation in a world challenged with feeding nearly 10 billion people by 2050. The effort will require complete protein — all the essential amino acids in the amounts […]

CHICAGO — Animal-free whey smoothie, vegan frittata and cell-cultured blue fin tuna — these foods will all be part of future protein innovation in a world challenged with feeding nearly 10 billion people by 2050. The effort will require complete protein — all the essential amino acids in the amounts required by the body — from non-traditional sources produced without putting additional strains on global land and water supplies, or further fueling climate change.

The COVID-19 pandemic accelerated efforts by technology-driven food companies to produce proteins that will make a noteworthy contribution to nutritious, balanced diets around the world. Chefs and food scientists are learning how to work with the proteins, some of which come in raw ingredient formats and others that are ready for cooking.

As of December 2020, Singaporeans have been able to dine on cell-cultured chicken developed by Eat Just Inc., San Francisco, following the city-state’s first-in-the-world regulatory approval in November for the animal-free chicken product. It is real chicken without the bird. It is the culmination of what Winston Churchill wrote in a 1931 essay: “We shall escape the absurdity of growing a whole chicken in order to eat the breast or wing, by growing these parts separately under a suitable medium.”

The concept was pursued for decades by Dutch researcher and entrepreneur Willem van Eelen, often referred to as the “godfather of cultured meat.” Eat Just acquired Mr. van Eelen’s patents after his passing and is now growing chicken on nutrient-dense media using chicken cells. The process takes about 14 days and yields a raw minced meat that Just Eat is currently forming into nuggets but has the potential for use in other formats.

BlueNalu, San Diego, is doing something similar in the seafood space. The company is focusing on growing fish cells — muscle, fat and connective tissue — on nutrient-rich medium and then using proprietary technology, including cold extrusion to produce a range of fish fillets with the same textural properties of those obtained from once-living fish. Additional benefits of cell-cultured protein is there is more control over the consistency of product with no waste, according to the manufacturers.

“There’s 100% yield,” said Lou Cooperhouse, president and chief executive officer of BlueNalu. “And with seafood, which can be a very seasonal protein, cell-culturing allows for year-round availability.”

BlueNalu plans to introduce products in 2022, starting with the launch of mahi mahi for the foodservice channel, followed by blue fin tuna. All the seafood will be manufactured at the nearly 40,000-square-foot pilot production facility in San Diego upon regulatory approval by the US Food and Drug Administration.

“Our products perform the same way as conventional fish fillets in all cooking applications,” Mr. Cooperhouse said. “Our medallions of yellowtail, for example, can be cooked via direct heat, steamed or even fried in oil; can be marinated in an acidified solution for applications like poke, ceviche and kimchi, or can be prepared in the raw state.”

Gerard Viverito, corporate chef, said, “I feel great about cooking with seafood that I know supports ocean health and species biodiversity. In addition, I don’t have to worry about bones, fish scales, filleting or having to throw away any unused fish parts.”

Berkeley, Calif.-based Perfect Day is reimaging dairy proteins without the cow. Unlike cell-cultured meat and seafood, the dairy proteins are dry ingredients used in applications similar to cow-sourced proteins.

“We produce animal-free milk proteins — casein and whey — using safe and proven fermentation techniques similar to how many common food components, like vitamins, probiotics, enzymes and natural flavors are made,” said Christine Bunting, senior director of food applications. “We use microorganisms such as bacteria, yeast or fungi, to make our proteins. They have a long history of safe use making ingredients in many foods you eat today. The microflora are good at producing animal proteins.

“We guide our microflora to act like a cow by giving it a special ‘blueprint’ from an open-source digital DNA library that allows these tiny organisms to ferment sugar and create animal-identical dairy proteins. It then gets filtered out, leaving pure animal-free dairy protein.”

The animal-free milk proteins are nutritionally and molecularly identical to those found in cow’s milk. They perform similarly in food and beverage applications.

Ice cream is the first application in the marketplace. Perfect Day currently supplies Brave Robot, Graeter’s and Nick’s with its ingredient. 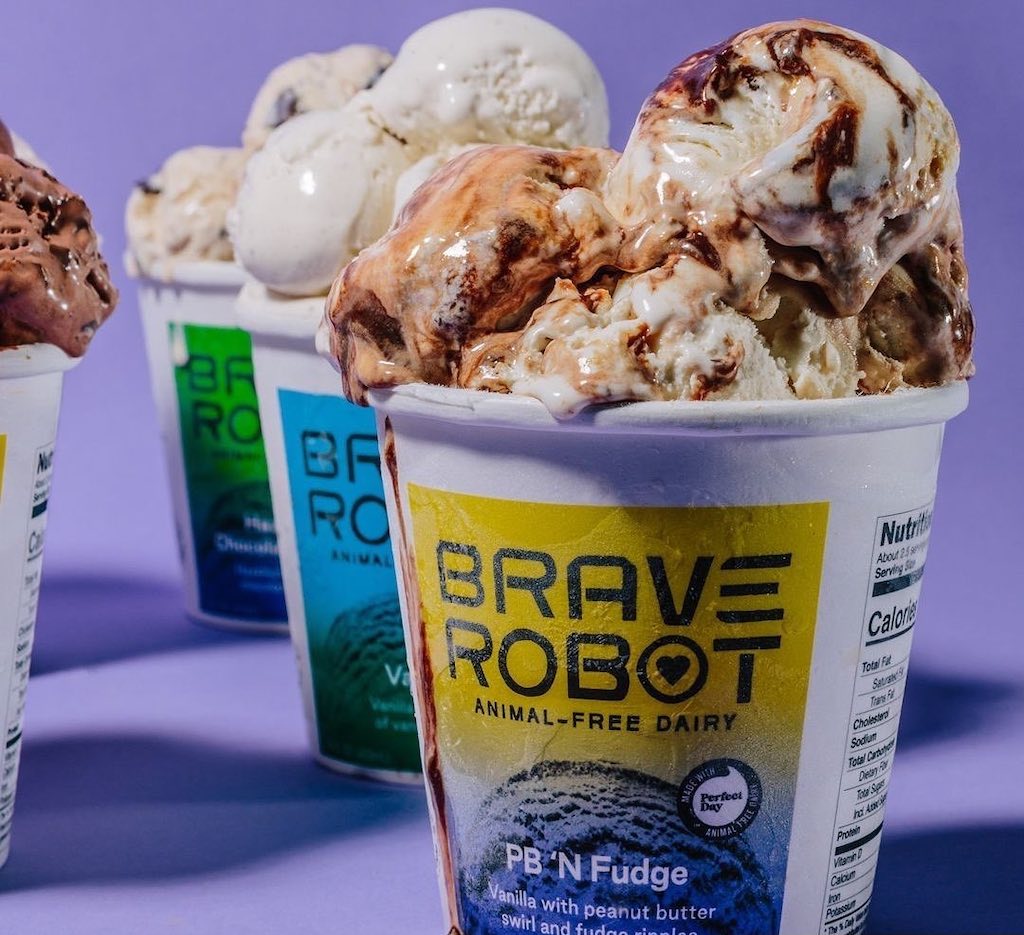 “Additional applications that our food team has created include, cream cheese, cheese curds, yogurt and more,” Ms. Bunting said. “Our protein is nutritionally and functionally identical to milk proteins. Therefore, products made with Perfect Day are required to list our animal-free protein on their ingredient labels as ‘non-animal whey protein.’”

Clara Foods, San Francisco, has created an animal-free egg white and a range of other functional protein products for sports nutrition, baking and industrial uses. Pepsin, for example, is a digestive enzyme used to modify the texture and performance of commercially prepared foods, everything from whipping cream to creamy sauces. It is found in humans and some animals, with most commercial pepsin extracted from the glandular layer of hog stomachs.

“Pepsin is used as an ingredient in the manufacturing of digestive health supplements among other products and has been an important proof point for our technology,” said Arturo Elizondo, co-founder and CEO. “Our main focus is to produce egg proteins that match the taste, texture and unique culinary functionality of real eggs. Our egg proteins are being readied for launch later this year.”

“Our protein technology platform replaces the process, not the product,” Mr. Elizondo said. “Our protein platform uses a fraction of the water, land, energy and greenhouse gas footprint, when compared to current factory farming models. And unlike plant-based protein alternatives, our proteins do not have taste or texture trade-offs. Our proteins have the same culinary functionality as their animal-derived counterparts, but with the added benefits of safe and consistent sourcing, quality control, price stability and enhanced sustainability.”

The animal-free egg proteins work across a range of applications, from foods and beverages, such as protein drinks, to desserts, such as angel food cakes and meringues. Prototype development shows the vegan protein matches the sensory impact of their animal-derived counterparts, Mr. Elizondo said.

“Our biggest challenge is driving awareness and education for the safety and efficacy of the precision fermentation process, as well as the availability of the product,” Mr. Elizondo said. “We are working with Ingredion to educate and inform companies on the process and its benefits and we will look to doing the same with consumers.

“We believe this is the future. The factory farming model is destructive to the planet, our health and billions of animals worldwide. Animal proteins have been made via fermentation for decades, and it’s time we leverage this technology to solve one of the world’s most pressing problems.”

There’s also a new approach to sourcing animal protein that involves krill, the small, shrimp-like planktonic crustacean found in the open seas and consumed by a number of larger animals, including whales. A new ingredient from Aker BioMarine, Oslo, Norway, was formulated for use in a range of applications to promote healthier eating while also being a sustainable protein source.

“It is a highly concentrated protein isolate with an average protein purity above 90%,” said Lalen Dogan, vice president of Aker BioMarine. “Containing all the essential amino acids at proportions in line with the body’s need and (it) has a complete amino acid profile. It has been enzymatically hydrolyzed into predigested peptides, which promotes rapid uptake into the body and better mixability into beverages. Further, it is heat-stable, which allows for high-temperature processing and minimal end-product precipitation.

“With high solubility, it is ideal for incorporation into powder and ready-to-drink beverages, as well as broader food and beverage applications for brands looking to grow their product portfolio with a novel, high-quality and sustainable protein source.”

In addition, its high water-binding capacity can give a smoother texture and moistness to provide maximum functionality in a variety of end-applications, from clear protein concentrates to bars.

The krill-based protein also is a natural source of minerals, such as calcium and magnesium, which is why the company initially is targeting the sports and active nutrition category. It has a neutral taste and smell profile, allowing its use in delicately flavored foods.

“The ingredient is sustainable, and that is something that consumers are looking for in a protein product,” Mr. Dogan said. “In fact, from clean labels to sustainably sourced ingredients, consumers are investing in brands that align with their beliefs and values. And as consumers continue to look at reducing their meat and dairy intake based on concerns over planetary and human health, marine-derived sources will become a great alternative to conventional protein sources.”

Thu Jul 8 , 2021
Dive Brief: Nearly eight out of 10 operators are confident in their ability to survive beyond the pandemic, according to research from Quadrant Strategies, jointly commissioned in June by DoorDash and Uber Eats. This is a marked improvement compared to the peak of the pandemic last year, during which a majority […]