Snacks are on sale at a big supermarket in central Seoul. [YONHAP]   Sales of snacks, frozen food products and coffee beans have risen sharply as more people eat and drink at home during the prolonged coronavirus pandemic.   Confectionery maker Orion said Thursday that its monthly sales last year […]

Snacks are on sale at a big supermarket in central Seoul. [YONHAP]


Sales of snacks, frozen food products and coffee beans have risen sharply as more people eat and drink at home during the prolonged coronavirus pandemic.

Snack sales are normally highest during the summer as people look for something to eat while drinking beer on those long warm evenings. In fact, Orion’s sales in August are normally about 20 percent higher than in December. 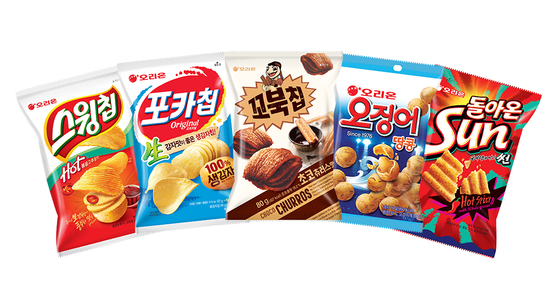 
“It is a very exceptional situation,” said a spokesperson for Orion. “The biggest reason is the growing number of people who enjoy drinking at home amid the strengthened social distancing guidelines. The release of new products was also a driving force.”

According to Emart24, sales of frozen food products in the second half of last year increased by 39 percent compared to the same period a year earlier. That’s over three times the year-on-year increase rate in 2019 compared to the previous year, which was 12 percent.

Coffee bean sales at Starbucks last year also soared by 33 percent from the previous year. In December, when people were only allowed to order takeout coffee, sales of coffee beans jumped 62 percent compared to the same month a year ago.

“As people are more reluctant to go out and therefore spend more time at home, frozen food products are gaining popularity from customers as they are very easy to keep in refrigerators for longer periods of time,” said Lee Yu-jin, a buyer at Emart24. “With the high demand of frozen food products, it is expected that demand for frozen desserts will also increase further. Emart24 plans to strengthen our products lineup according to that.”

Sat Jan 23 , 2021
The COVID-19 pandemic has forced the United States economy into an economic crisis. Across the country, more than 10 million Americans are unemployed, 14 million renters are behind on payments, and 29 million adults – and at least 8 million children – are struggling with food insecurity. Because of pervasive […]