GWINNETT COUNTY, Ga. — The Gwinnett County solicitor general’s office is weighing in on one of the most controversial parts of Georgia’s new election law – and vowing not to prosecute violators. In a statement released on Monday, the office took issue with a portion of Georgia Senate Bill 202, […]

GWINNETT COUNTY, Ga. — The Gwinnett County solicitor general’s office is weighing in on one of the most controversial parts of Georgia’s new election law – and vowing not to prosecute violators.

In a statement released on Monday, the office took issue with a portion of Georgia Senate Bill 202, signed into law late last month, which makes it a misdemeanor to give away water within 150 feet of the outer edge of the polling place or within 25 feet of any voter in line.

In response to that specific portion of the new law, the office issued a one-sentence statement reading:

“The Gwinnett County Solicitor’s Office will not prosecute individuals arrested for distributing nonpartisan beverages and/or food to voters waiting in line for long hours on Election Day in Gwinnett County as there is no rational, legal basis for this law.”

The response comes in direct response to the section of the law that reads: “No person shall solicit votes in any manner or by any means or method…or participate in the giving of any money or gifts, including, but not limited to, food and drink, to an elector.”

The only other state that prohibits the delivery of food and drinks during an election in some form is Montana, but specifically, if it’s coming from a candidate, political party personnel, or volunteers, according to the National Conference of State Legislatures.

Experts suggest that Georgia’s law even prevents friends and family from providing snacks or beverages to those in line – allowing only poll workers to do so. Breaking this law is now punishable by up to a year in prison and a $1,000 fine – at least in cases where it’s enforced.

Tue Apr 6 , 2021
Smith plans to be in Boston April 8 for the Mooby’s ribbon-cutting. Here’s how it works: House of Blues Boston will “cosplay as a Mooby’s” as Smith puts it. Order online via MoobysPopUp.com and schedule a time to snag your fare. Framingham’s Jack’s Abby brewery even created a Mooby’s beer. […] 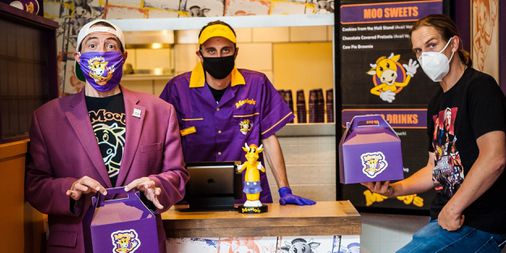