A California district court has granted a preliminary injunction to the California Chamber of Commerce and prohibited the filing of new Proposition 65 lawsuits alleging exposure to acrylamide in food. Our Environment, Land Use & Natural Resources Group discusses the ruling and what it means to the food and beverage […]

A California district court has granted a preliminary injunction to the California Chamber of Commerce and prohibited the filing of new Proposition 65 lawsuits alleging exposure to acrylamide in food. Our Environment, Land Use & Natural Resources Group discusses the ruling and what it means to the food and beverage industry.

On March 30, 2021, Chief U.S. District Judge Kimberly Mueller granted the California Chamber of Commerce’s (CalChamber) motion for preliminary injunction in its case contending California has unconstitutionally compelled businesses to display misleading Proposition 65 warnings about the alleged dangers of acrylamide in food and beverage products. While the CalChamber action is pending, the preliminary injunction prohibits any person, including private enforcers, from filing or prosecuting a new lawsuit to enforce the Prop. 65 warning requirements for cancer as applied to acrylamide in food and beverage products.

Prop. 65 requires businesses with 10 or more employees, including those that ship products into California, to provide clear and reasonable warnings before they knowingly and intentionally cause an exposure to a chemical listed as known to the state to cause cancer or reproductive toxicity.

Violations of Prop. 65 are subject to civil penalties of up to $2,500 per day per unit of product sold in California. State and local prosecutors can bring enforcement actions for failures to warn, but more likely than not, enforcement is brought by private litigants. Successful enforcers can recover a quarter of the civil penalty imposed and their attorney’s fees.

The Prop. 65 warning requirement is subject to exceptions and affirmative defenses. For example, Prop. 65 grants businesses an affirmative defense if they can prove the alleged exposure “poses no significant risk assuming lifetime exposure at the level in question.” See Health & Safety Code § 25249.10(c).

Importantly, it is a defendant’s burden to prove an exposure poses no significant risk, so a plaintiff need not plead or prove that an exposure did or could cause cancer. And given the high standard of scientific proof required by section 25249.10(c), courts have found that “it may take a full scale scientific study to establish the amount of the carcinogen is so low that there is no need for a warning.” SeeConsumer Defense Group v. Rental Housing Industry Members, 137 Cal. App. 4th 1185, 1215 (2006). One state appellate court has observed that this allocation of burdens, when combined with other provisions of the private enforcement regime, sets up a framework that may permit unscrupulous attorneys to “shake down” vulnerable targets” wielding dubious claims of carcinogenic exposure. See id. at 1215–19.

Although acrylamide was first detected in food in 2002, it has likely always been a part of many foods. Sometimes it occurs naturally. Often, however, it forms because of a reaction between sugars and the amino acid asparagine, which naturally occur in many foods. Roasting, baking, frying, or otherwise cooking food at a high temperature appears to cause acrylamide to form. Acrylamide is most commonly found in foods made from plants.

There are significant uncertainties in epidemiological evidence regarding whether acrylamide is carcinogenic to humans. While some government entities have concluded that acrylamide “probably” causes or is “likely” to cause cancer in humans, none of these authorities has urged people to avoid foods that contain acrylamide. Because acrylamide is found in so many foods, it is probably impossible to avoid it completely. In fact, both federal and state public health authorities recommend eating foods that may contain acrylamide. The U.S. Food and Drug Administration (FDA) advises not to attempt removing fried, roasted, and baked food from their diets. The FDA’s best advice is to eat a variety of healthy foods. California public health authorities have also decided not to warn against acrylamide exposure in coffee.

CalChamber initiated its case against the California attorney general in 2019, alleging that the First Amendment prohibits California from forcing businesses to make false statements. The reasoning behind the case was that because California does not “know” that eating food with acrylamide causes cancer in people, Prop. 65 is unconstitutional if it mandates that assertion. Council for Education and Research on Toxics (CERT), a Prop. 65 private enforcer, intervened in the lawsuit. The complaint was subsequently dismissed and amended to add a claim under 42 U.S.C. § 1983 and to request only prospective relief. CERT and the state attorney general filed motions to dismiss, which the court denied.

CalChamber then moved for a preliminary injunction barring the state and any private litigant from enforcing Prop. 65 against businesses that do not warn consumers that acrylamide in food is “known to the State of California to cause cancer.” Importantly, it sought prospective relief only – it asked the court to enjoin only “new lawsuits.” CalChamber did not ask the court to prohibit notices of alleged Prop. 65 violations, to enjoin existing lawsuits, or to prohibit settlements or consent decrees.

The state and CERT argued that a preliminary injunction would constitute an unconstitutional prior restraint on its First Amendment rights. A “prior” or “previous” restraint is an administrative or judicial order “forbidding certain communications” before those communications occur. Alexander v. United States, 509 U.S. 544, 550 (1993). The court concluded that if CalChamber were requesting a preliminary injunction against pre-suit demand letters, settlement negotiations, or notices of violations, it would likely be requesting a prior restraint. But CalChamber was not asking for that relief. Instead, CalChamer only requested an injunction against future lawsuits while its case was pending. Because the injunction would not forbid letters and demands, it would not be a prior restraint on speech.

The court further concluded that a preliminary injunction was proper because CalChamber was likely to succeed on the merits. Under Zauderer v. Office of Disciplinary Counsel of Supreme Court of Ohio, 471 U.S. 626 (1985), the government may compel truthful disclosure in commercial speech if the compelled disclosure is “reasonably related” to a substantial government interest. The required disclosure must be limited to “purely factual and uncontroversial information.” Applying Zauderer to the CalChamber case, the court found:

In this case, the safe-harbor warning would read: “Consuming this product can expose you to [acrylamide], which is … known to the State of California to cause cancer. For more information go to www.P65warnings.ca.gov/food” …. At this stage of the case, the State has not shown this warning is purely factual and uncontroversial. By asserting vaguely that consuming a product can “expose” a person to acrylamide—a chemical most people have likely never used in preparing food or even heard of—the warning implies incorrectly that acrylamide is an additive or ingredient.

The court further found that dozens of epidemiological studies have failed to tie human cancer to a diet of food containing acrylamide. Nor have public health authorities advised people to eliminate acrylamide from their diets. They have at most voiced concern. In short, the court concluded that the safe harbor warning is controversial because it elevates one side of a legitimately unresolved scientific debate about whether eating foods and drinks containing acrylamide increases the risk of cancer.

The court concluded CalChamber was likely to show the acrylamide warning required by Prop. 65 is controversial and not purely factual and would be impermissible under Zauderer. The court granted CalChamber’s motion for preliminary injunction.

What Businesses Need to Know

Under the court’s order, while the CalChamber case is pending, no person may file or prosecute a new lawsuit to enforce the Prop. 65 warning requirement for cancer as applied to acrylamide in food and beverage products. The injunction applies to both public and private enforcers.

Notably, the order does not alter any existing consent decrees, settlements, nor other agreements related to Prop. 65 warning requirements for acrylamide. Thus, the order does not permit businesses that have already agreed to display a certain warning to take those warnings down, and businesses that have agreed to reformulate their products to reduce acrylamide content are not permitted to breach those agreements.

Fri Apr 9 , 2021
The city’s priciest restaurant, where tasting menus start at $335 a head, is taking it to the streets. No, Eleven Madison Park isn’t trying to sell its three-Michelin-star cuisine from roving Neapolitan pizza or Nepali dal bhat trucks. Instead, it’s preparing and trucking high-quality, basic meals for free to some […] 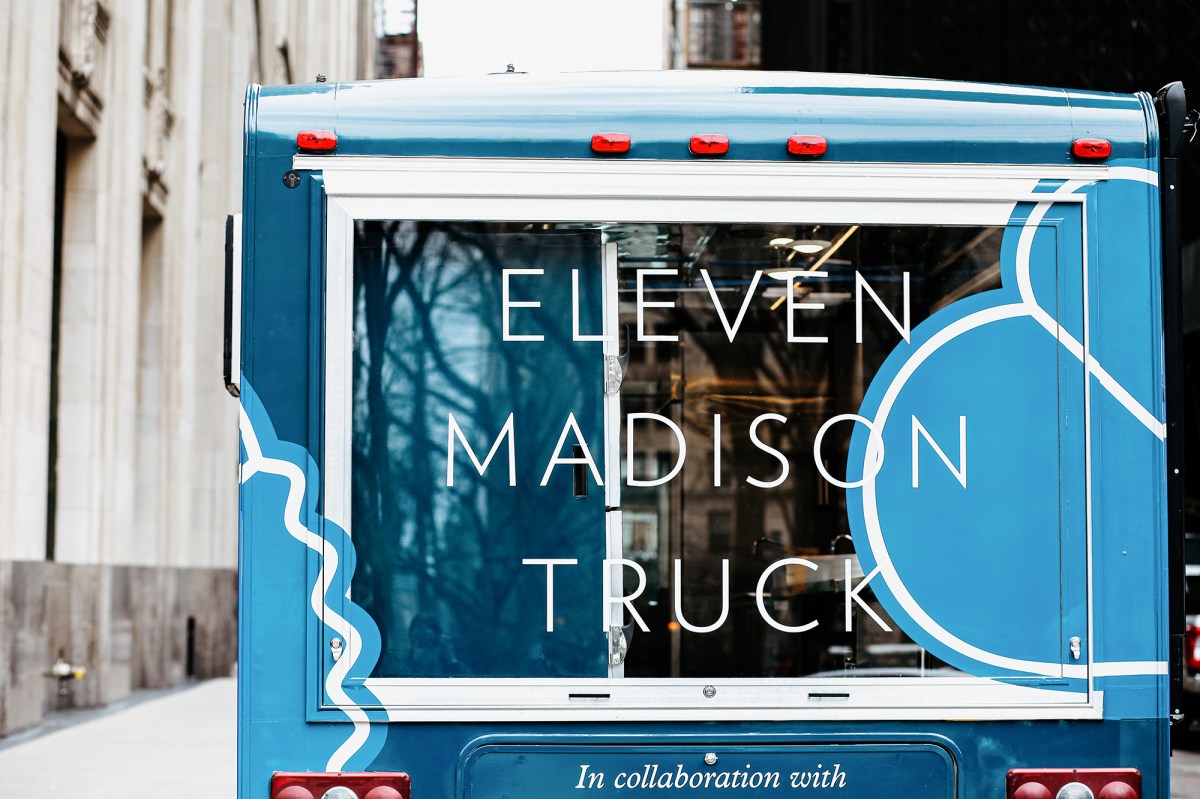