Chipotle announced Monday that it’s boosting its average wage to $15 per hour by the end of June as the industry continues to struggle with a labor shortage. The wage increase for new and existing hourly and salaried employees will be implemented over the next few weeks, the company said. The upgraded […]

Chipotle announced Monday that it’s boosting its average wage to $15 per hour by the end of June as the industry continues to struggle with a labor shortage.

The wage increase for new and existing hourly and salaried employees will be implemented over the next few weeks, the company said. The upgraded pay scale will result in hourly employees earning starting wages ranging from $11 to $18.

In conjunction with the added benefits, Chipotle is looking to hire 20,000 employees across the U.S. as it plots the opening of roughly 200 restaurants this year. To support its hiring efforts, the brand will hold a virtual career fair this Thursday from 10 a.m. to 1 p.m. PT. The event, which will be launched on community platform Discord, will include live sessions with Chipotle employees that highlight benefits, career paths, cooking demos, and more.

“Chipotle is committed to providing industry-leading benefits and accelerated growth opportunities, and we hope to attract even more talent by showcasing the potential income that can be achieved in a few short years,” said Marissa Andrada, chief diversity, inclusion, and people officer, in a statement. “We’re looking for people who are authentic, passionate and want to help cultivate a better world through real food and real personal development.”

READ MORE: Why the Hiring Crisis is a Moment of Reckoning for Restaurants

The elevated wages and salary join a growing list of benefits that Chipotle has added in the past couple of years. For example, in June 2019 the chain rolled out a bonus program that gives hourly employees the opportunity to earn up to an extra month’s pay each year. A few months later the brand launched a debt-free degree program and simplified access to mental health and financial wellness benefits. Amid COVID, Chipotle paid out more than $40 million in bonuses and assistance pay to assist employees through the rough environment.

Chipotle and other major chains—across both the full-service and quick-service segment—are battling for what has become a slim labor pool. Brands like IHOP, Applebee’s, Taco Bell, and KFC have all announced their intention to hire thousands of workers. Similar to Chipotle, these chains are boosting benefits, as well. Whataburger, which gave staff more than $90 million in bonuses for work during COVID, promoted all of its general managers and pushed their salaries to six figures. Taco Bell revealed this spring that general managers at corporate stores would now receive up to four weeks of accrued vacation per year. These workers also now receive four weeks of paid “baby bonding” time for new parents and guardians and eight weeks of fully paid short-term disability after the bird of a child.

One McDonald’s store in Florida was actually offering $50 to individuals who’d come sit down for an interview. The burger giant said during its Q1 earnings call that it’s working through changes in corporate stores from a wages and compensation perspective.

Most operators blame the labor shortage on the elevated unemployment benefits from the federal government. In fact, Black Box Intelligence polled more than 360 operators on the topic, and 57 percent said higher pay through unemployment was the main driver. The next highest option, better quality of life in another industry, garnered 20 percent. The $1.9 trillion American Rescue Plan extended a $300 weekly boost in unemployment until the end of September.

For some, the labor shortage has affected the supply chain, including Wingstop. CEO Charlie Morrison attributed the headwind to “government stimulus and creating an artificially high wage rate that is competitive to the people that are necessary to actually process chicken.”

Food and drink places added 187,000 jobs in April, according to the U.S. Bureau of Labor Statistics. Roughly 10.64 million were on payroll, which is still down 1.65 million from February 2020.

DFW Airport contributed more than 32,000 tons of waste to landfills every year. Now it's turning passengers’ food into fertilizer to help bring change

Wed May 12 , 2021
After discovering about a quarter of the waste generated in DFW’s terminals is food, workers at airport restaurants are being trained to compost. DALLAS — We’re told to live in the moment, be mindful, and be present – especially when we travel. But we can’t ignore the future. Every move […] 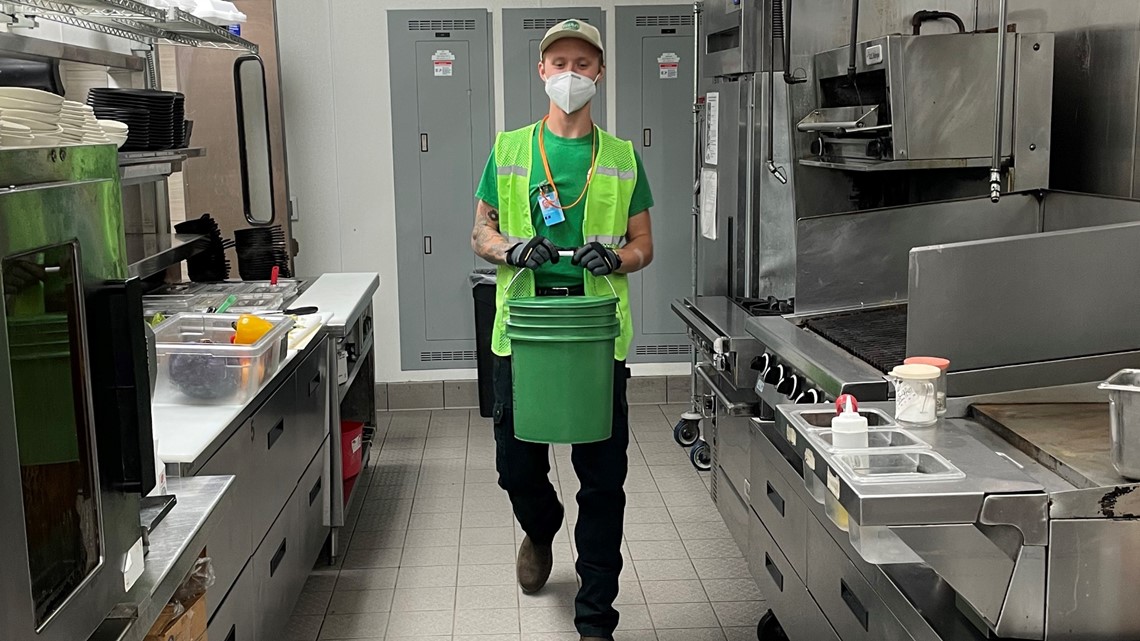