Dan Gable to make Hy-Vee appearance alongside beer brats The former location of Brewed Awakenings coffee shop is seen May 10, 2021, with for sale signs in the windows on First Avenue SE in Cedar Rapids. The location has found new life as Tee’s Liberian Dish. (Andy Abeyta/The Gazette) Tee’s […] 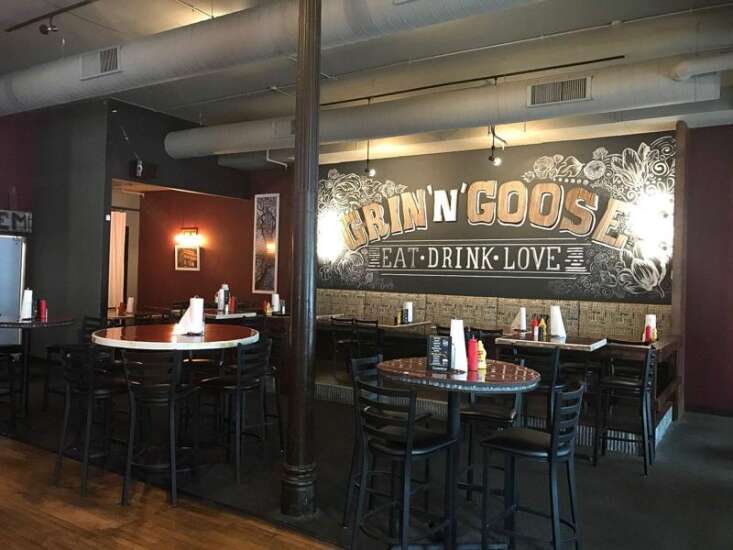 The former location of Brewed Awakenings coffee shop is seen May 10, 2021, with for sale signs in the windows on First Avenue SE in Cedar Rapids. The location has found new life as Tee’s Liberian Dish. (Andy Abeyta/The Gazette)

Owner Teepeu Pewu held a grand opening for the new restaurant on July 17, staking a claim as the only African restaurant open in Cedar Rapids.

The Liberian menu features a variety of unique stews, meats, gravies and rices. Dishes include fufu, a popular sticky dough; jollof rice with tomatoes and onions; and attieke made from fermented cassava, fish and vegetables.

The former coffee shop location was a longtime fixture across from Coe College. First closed in March 2020 at the advent of the pandemic, owners Larry and Junetta Janda announced the closure would be permanent in August.

Grin N Goose at 227 Second Ave SE in Cedar Rapids closed on June 26. Soon it will reopen as Cliff’s Dive Bar and Grill.

Grin N Goose occupied the spot starting in January 2017, after the previous eatery, Zins, closed in 2016.

Cliff’s Dive Bar owners Cale Henderson, Tin Kindle and Justin Zehr told KCRG they hope to have the new location open within the next few months.

Kindl and Zehr already have a hand in a few Cedar Rapids restaurants: Brick’s Bar and Grill, LP Street Food and its adjacent Scoop Coop, and Moco Game Room and Hot Dog Bar.

Henderson announced on social media in June that he would be involved in ownership and day-t- day operations for Moco and the newly acquired venture downtown.

“The Grin N Goose property is as beautiful as any building downtown with nothing but potential,” he said.

Wrestling legend Dan Gable will make an appearance at the Marion Hy-Vee, 3600 Highway 151, in conjunction with an exclusive beer brat named after him.

The Gable Beer Brats, created in partnership with Waterloo-based SingleSpeed Brewing Co., are available at select Hy-Vees throughout the state, including most Hy-Vees within the Corridor. The brats are made with Gable beer, a Munich Helles lager, which also is available at Hy-Vee.

Wed Jul 21 , 2021
Restaurant owners are reporting disruptions in food distribution services caused by demand spikes and labor shortages. From mislabeled products to delayed, half-fulfilled and canceled deliveries, valley restaurants are selling out of products and wasting money paying employees to work when the food they’re paid to prepare hasn’t arrived. “We used […]