Dive Brief: Sparkling water maker Spindrift is adding hard seltzer to its beverage lineup with Spindrift Spiked. The lightly carbonated, hard sparkling water is made without synthetic flavors, sweeteners or additives.  Sweetened with cane sugar and squeezed fruit, Spindrift Spiked contains 82 to 95 calories per 12-fluid ounce can with […]

The hard seltzer segment continues to see major traction among consumers and Spindrift is the latest beverage maker to get in on the craze. The company expects retail sales of flavored and hard sparkling water to reach $15 billion by the end of 2022.

Spindrift was one of the early players in the sparkling water trend and has enjoyed quick growth, reporting an 800% boost in sales between 2016 and 2018 alone. Less than one month ago, the company launched a new line of unsweetened lemonade-inspired sparkling waters. This foray into an alcoholic version of its popular beverages is a natural progression.

The timing of Spindrift’s hard seltzer debut also coincides with summer, when consumers may be reaching for alcohol more frequently. With alcohol consumption at above-average levels thanks to COVID-19, adding a new option to the shelf makes sense.

Getting consumers to sip on this new alcoholic beverage won’t be a simple task, however. The hard seltzer market is booming and beverage makers are all vying for space in refrigerators. Coca-Cola inked a deal with Molson Coors that makes the latter the exclusive manufacturer, marketer and distributor of Topo Chico Hard Seltzer in the U.S., with a launch set for the first half of 2021.

Also this month, Diageo acquired Far West Spirits LLC, which owns Lone River Ranch Water, a West Texas-inspired hard seltzer. The move was designed to give Diageo a quick entry into the booming hard seltzer market while adding another premium product to its portfolio.

Meanwhile, Anheuser-Busch recently announced that it will invest more than $50 million this year on new seltzer brewing capabilities. Some of its current offerings include Bud Light Seltzer, Natural Light Seltzer, and cocktail-inspired options.

One way that Spindrift may be able to differentiate itself is by tapping into a growing preference for better-for-you products that offer health benefits on top of flavor. Spindrift’s clean-label hard seltzer could become a favorite among consumers who don’t want to compromise between choosing healthier options and keeping booze on the menu. Spindrift has already put extensive effort into marketing itself as a better-for-you brand and the halo could bubble over to its new alcohol-focused venture.

Other hard seltzer makers are already fast at work on a better-for-you hard seltzer line, however. Molson Coors recently upped the production of its beverages to keep up with consumer demand, including its hard seltzer line Vizzy, which includes antioxidants and vitamins. Brands like JuneShine and Flying Embers are also peddling alcoholic kombucha, marrying two of consumers’ biggest beverage obsessions.

That said, the better-for-you angle is not without its risks: Molson Coors has recently been accused by the Center for Science in the Public Interest and Consumer Federation of America for violating Food and Drug Administration rules around its promotion of Vizzy‘s vitamin C and antioxidant content.

Spindrift may also feel the squeeze of opting to build a spiked version in-house in lieu of partnering with an existing beverage manufacturer. Although an in-house effort gives Spindrift full control over the development, manufacturing, and marketing of Spindrift Spiked, alcohol is an uncharted realm for the beverage maker. Partnering with an established alcohol player, like Coca-Cola’s partnership with Molson Coors for Topo Chico Hard Seltzer, could provide insight into the segment.

But part of Spindrift’s success is tied to its strong commitment to cultivating a specific brand identity that has clearly resonated with a large swath of consumers. Time will tell whether the brand can pull off the same feat in the liquor aisle.

Spindrift has been securing serious capital to fuel its mission. It raised $20 million in March 2018 and $29.8 million in March 2020, with total funding running north of $70 million. This is unsurprising given investors’ serious thirst for the sparkling water craze. Spindrift will need all the capital it can muster to help it compete with the heavyweight beverage makers who are also entering the alcohol space.

Tue Mar 16 , 2021
By Crawford County Now Staff March 16, 2021 9:58 am   BELLEVUE – Twice a year, Firelands Federal Credit Union (Firelands FCU) offers qualified members the opportunity to “skip” a monthly loan payment through our Skip-A-Pay program. For every payment that is skipped, Firelands FCU donates $5 to a local […] 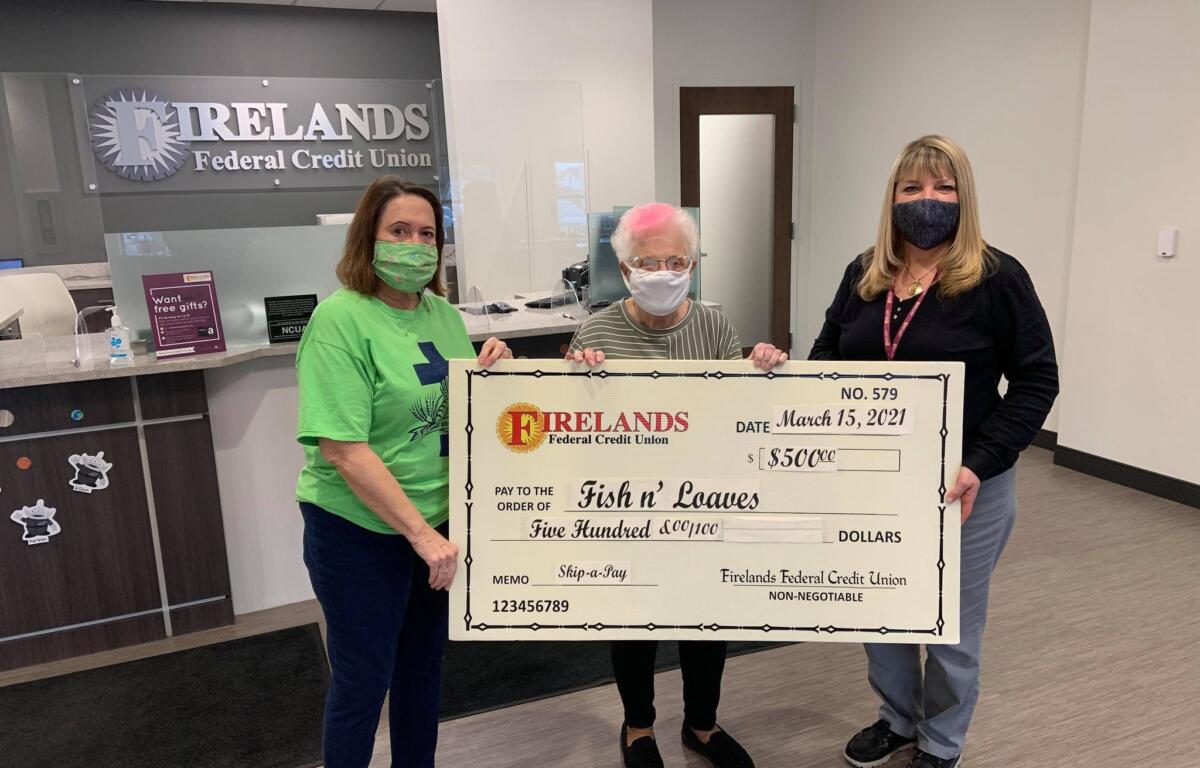