“It’s 85% by weight squash, corn and beans that are grown in Minnesota,” he said. He pulls a lever toward him, and with a piece of parchment paper, Gail Francis catches the single, thick disc that emerges from the Patty O Matic machine. “True mom-and-pop, we pull them one at […]

“It’s 85% by weight squash, corn and beans that are grown in Minnesota,” he said.

He pulls a lever toward him, and with a piece of parchment paper, Gail Francis catches the single, thick disc that emerges from the Patty O Matic machine.

Superior Small Batch owners Gail Francis and Shane Dickey are partners in life and business. Dickey is the full-time chef, and Francis works mostly behind the scenes as bookkeeper, kitchen helper and “just being a trusted partner,” she said. (Clint Austin / [email protected])

The couple behind the plant-based food business Superior Small Batch has made more than 3 tons of veggie burgers this way. But they have their sights set on an upgrade.

“Once we get a machine that can make these patties for us, we’ll have to change our name to Superior Medium Batch,” Dickey said.

Dickey and Francis launched SSB about three years ago after a play on a family meatless sausage recipe became their Original Bangers.

Soon after came their Heartyburger, then the Curryburger, and now 15 other products ranging from hummus to coconut curry to vegan parm.

Their goods are available at both Whole Foods Co-Op locations, a number of Super One Foods stores in Duluth and some Northland eateries.

Years ago it had a slow start, but the Curryburger is now a menu mainstay along with the Original Bangers in their breakfast burritos and more.

Wussow appreciates the local option for plant-based food, and he likes that the Curryburger is vegan, gluten- and nut-free, making it attractive for those with any kind of allergy or preference.

As for Francis and Dickey, their business has grown, but they’re very down-to-earth and personable. “Last time I saw them, they just had fishing rods and a canoe, and they were going to the Boundary Waters or something,” Wussow said.

Dickey pointed to 20- and 35-gallon bins of shiitake mushrooms, cashews, tahini and flax seeds stored near their rented commercial kitchen in Superior.

It’s hard to get a good consistency without egg, and you really have to pay attention to the moisture level. There’s a general group of ingredients that act as the backbone of their veggie burgers: tapioca starch, oats, brown rice, he said.

When you get a template down and the consistency, then it’s on to the flavor profile.

Superior Small Batch uses a variety of spices to season Curryburgers. Some recipes are available on their website, but: “I won’t talk about my spice mix,” Dickey said. (Clint Austin / [email protected])

They’re not protective over their recipes, and some are available on their website. They recently hosted a virtual cooking class on how to make their burgers. But: “I won’t talk about my spice mix,” Dickey said.

SSB chef is his full-time gig; Francis works mostly behind the scenes as bookkeeper, kitchen helper and “just being a trusted partner,” she said.

Other than their graphic design (made by Dave Adams of Big Wave Dave and the Ripples), they do everything themselves: pattying, packaging and delivering.

“We’re really good at making food, but everything else is a learning curve: how do you market, how do you keep the books, how do you develop relationships with suppliers, so many things I never thought about,” Francis said.

Save for a scramble for nutritional yeast, COVID-19 hasn’t affected their business.

During a recent Wednesday night, Mike King of Superior stopped by to pick up an order for himself, his co-workers and his family.

“Their hummus wrecks me. I get a month’s worth,” he said.

King has kept a vegan diet for two years, vegetarian for eight years before that, as do his daughter and wife. It means something for him to get locally made, plant-based food.

And, he is impressed with SSB’s range. King orders their brats during the summer, and he’s a fan of their biscuits and gravy year-round. He’s happy he had access during the pandemic, and he hopes “more restaurants carry their stuff.”

Dickey and Francis met on an online dating site.

“Which is kind of funny that we met that way because neither of us had indoor plumbing. We were both living out in the wild,” Francis recalled.

She was in an old farmhouse in Wisconsin; he was in a one-room cabin in the Brimson area.

They both had a background in food and wanted to start a business. When they got together, it all seemed possible, she said.

They lived in the North Woods before moving to Duluth three years ago, and things took off from there.

“Creating the business from scratch with my life partner has been very gratifying,” Dickey said. “It’s introduced elements into our relationship that wouldn’t have been introduced otherwise, and it’s been for the better.”

Superior Small Batch owner Gail Francis removes a Localburger from the press at the production space in the basement of Pilgrim Lutheran Church in Superior. “Once we get a machine that can make these patties for us, we’ll have to change our name to Superior Medium Batch,” said SSB co-owner Shane Dickey. (Clint Austin / [email protected])

“I already knew you were a great chef and a really creative thinker. … I might worry about other things, but I don’t worry at all about the food,” Francis said.

She has been a driving force as far as their business’ values.

It’s hard to pay a part-time person $15 an hour when you’re not taking home a check, added Dickey. But they built their business on values they could “hold their heads up about. That’s been Gail’s influence.”

Francis’ advice is, don’t go into business with your spouse or partner unless you trust them. “Every now and then, one of us feels really strongly about something, and the other one just has to say, ‘OK, I trust you.’ And that’s actually how we got the Curryburger,” she said.

Newly created Localburgers sit on a tray at the Superior Small Batch production space. The LocalBurger uses seasonal produce of area farms. The recipe for the burger is inspired by the indigenous story of The Three Sisters, and is made up principally of locally grown squash, sweet corn and black beans. (Clint Austin / [email protected])

While 70-80% of their diet is plant-based, they’re not vegan. Dickey fishes and hunts, and they eat a fair amount of game and fish.

“The eating of our diet isn’t 100% vegan. We don’t want to profit off the animal industry,” he said, adding that it’s a little tricky being in the vegan food business and not being vegan.

“Most people understand that people are in different places,” added Francis.

Superior Small Batch’s plant-based Original Bangers, their Curryburger and their flagship Heartygurger are available at Whole Foods Co-Op, a number of Super One Foods stores in Duluth, and some Northland eateries. (Clint Austin / [email protected])

While they suspect most of their customers are omnivores, they have run into some issues with labeling their food.

“It’s all plant-based. Do we call it ‘vegan food’? Does that mean people who aren’t vegans aren’t going to think it’s for them? Or, if we say, ‘It’s not just for vegans,’ Well, that makes it sound like there’s something wrong with being vegan,” she said.

Added Dickey: “What this is, is good food for everybody.”

Superior Small Batch owner Shane Dickey places a batch of LocalBurgers in a cooler. When it came time to start a business, he and Gail Francis felt they didn’t want to profit from animal-based food, so their foods are all plant-based. (Clint Austin / [email protected])

Fri Feb 5 , 2021
This probably isn’t the news you want to hear heading into Super Bowl weekend, but fast-food chains across the country are facing low supplies of chicken wings. And experts say we may be on the cusp of a major nationwide wing shortage. According to Restaurant Business, the demand for the […] 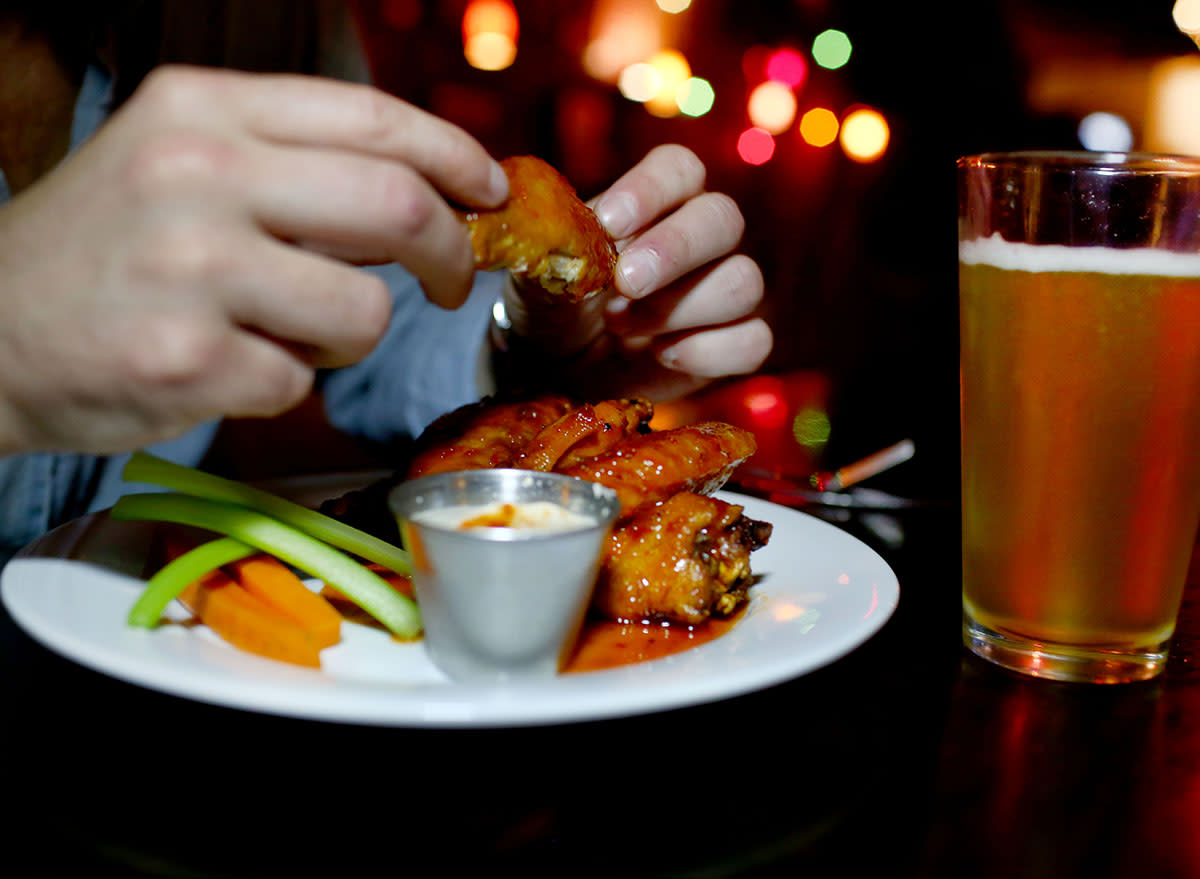