The demand for new fast-food chicken sandwiches is higher than ever before. McDonald’s, Burger King, Chick-fil-A, and KFC have all launched new chicken sandwiches in the past year. The strategy for many chains appears to be replicating competitors’ successes to win over customers. Visit the Business section of Insider for […]

For fast-food chains working tirelessly to emerge from the coronavirus pandemic with a strong customer base and an even stronger financial position, one thing is for certain: The bird is the word.

From Chick-fil-A to Taco Bell and McDonald’s, new chicken offerings have been a focus for every brand, even if they’re not typically chicken restaurants. In the past year alone, seven fast-food chains have experimented with or released a new chicken product, and more specifically, chicken sandwiches.

When Popeyes introduced a new fried chicken sandwich in August 2019, the chain could never have imagined the chaos that would ensue. It became so popular that many employees worked 60-hour weeks to fulfill orders. In just two weeks, the sandwiches were sold out completely and didn’t return for months. Customers even resorted to violence to get their hands on one.

It was then that followers of the fast-food industry — and lovers of fast food, in general — realized the power that a new menu item, and more specifically a chicken sandwich, could have. Following its release, Popeyes’ earning reports shed even more light on how successful the chicken sandwich was for the chain.

“When Popeyes launched their chicken sandwich in late 2019, it created a lot of buzz and excitement that fueled a lot of the other brands to look at their own chicken platforms and make a judgment on their offerings,” former McDonald’s chef Mike Haracz told Insider. “When anything like that happens, other chains’ main objective is to get a piece of that share.”

Since the start of the pandemic, Chick-fil-A chain has adapted in innovative ways beyond its menu, from arming employees with iPads to take orders from customers over FaceTime to introducing ghost kitchens for speedier delivery orders.

The hard work appears to be paying off. According to Edison Trends, Chick-fil-A received more online chicken sandwich delivery orders than any other brand, cornering 45% of the total online order market share in December 2020.

“Chick-fil-A has very strong brand loyalists,” Haracz said. “I’ve sat in panels when I was doing chicken work. They will try the food, but when you tell them it’s not from Chick-fil-A they’ll say, ‘Well, I think it’s great but I’m not going to buy it because I am a Chick-fil-A consumer.’ There are a certain number of consumers who are not going to go to McDonald’s for a chicken sandwich because they go to Chick-fil-A.”

Other chains want in, too

Burger King, KFC, Wendy’s, and other chains have all released or begun testing new chicken sandwiches in the past year, and many of them are also Southern-style, just like the Popeyes and Chick-fil-A offerings.

McDonald’s just released three new chicken sandwiches this month — one of which looks and even tastes similar to Chick-fil-A’s original sandwich. However, McDonald’s has been explicit in saying they’re not taking direct inspiration from or copying any other brand.

“We’ve been focused on delivering a great-tasting chicken sandwich for our customers for years, and took the time to get it just right,” Lauren Schultz, McDonald’s senior director of brand and menu strategy, told Insider. “We’re leveraging the global strength of longtime fan-favorites, like chicken McNuggets and the McChicken sandwich, while also innovating with new line extensions and flavors … Introducing the new crispy chicken sandwich in the US is another step on our journey.”

However, Haracz echoed Insider’s sentiments that the chains’ sandwiches looked similar, telling Insider “it’s very apparent” from its new chicken sandwich that McDonald’s might be trying to get in on Chick-fil-A’s success.

“It comes in a foil bag just like Chick-fil-A, from what I understand it has a very similar flavor profile,” Haracz said. “There are some people who might go to Chick-fil-A strictly for the flavor, and if McDonald’s can match that, they may be swayed.”

‘The pandemic has increased the longevity of the chicken trend’

According to Edison Trends, online spending on chicken sandwiches grew 420% between January 2019 and December 2020. Forbes also reported that chicken sandwiches were the top food item ordered through food delivery service Door Dash in the first half of 2020.

“The pandemic has increased the longevity of the chicken trend,” Haracz said. “At the beginning of the pandemic, there was less variety and creativity in both fast-food restaurants and even the grocery store, and we were even seeing meat shortages. Now, almost a year later, customers want new and exciting flavors. Chains are also focusing on the chicken itself — increasing its flavor, its tenderness, its juiciness, really performing and exceeding customer expectations.”

FreightWaves’ newsletter The Stockout compounded research that chicken is seeing a surge in demand, announcing that chicken-breast prices have reached five-year highs at $3.41 per pound. Experts are also saying the recent increase in demand for fast-food chicken products is even helping chicken suppliers to overcome losses from a stunted restaurant market.

Chains like McDonald’s, Burger King, and Wendy’s are trying to attract some customers away from ‘chicken chains’

The answer to why so many chains are making chicken sandwiches right now appears to be simple: supply and demand. Customers want the very best fast-food chicken sandwich, so every chain is vying to make it — or at least something close enough to what fans already like from other chains.

However, Haracz stresses that though “overtaking these chicken chains is assumedly a dream for a lot of these chains,” they are still focused on providing variety in their menus over putting all their eggs in one basket.

“A lot of the chicken wars players, including McDonald’s, Burger King, and Wendy’s, are not just chicken restaurants,” he said. “As much as they would love to win in chicken, their business model is to please a variety of customers. Their initiative is to get a part of the share, to get a bigger piece of the pie.”

For many chains, creating a buzz-worthy sandwich could require mimicking the formula that made the Popeyes chicken sandwich a household name. Pickles and a thick and crispy chicken fillet in both spicy and mild appear to be the winning combination for fast-food chains trying to capture customer attention and loyalty.

It worked for Popeyes. It worked for Chick-fil-A. Now, only time will tell if McDonald’s, Burger King’s, and KFC’s attempts at a Southern-style chicken sandwich can get customers’ attention and keep it.

However, Haracz added that McDonald’s, Burger King, KFC, and other chains are likely “not envisioning that they’re going to take over the chicken market” entirely.

“Their strategy is assuming that the number of consumers is finite,” he said. “Let’s say that there are 100 chicken consumers. If 90 of them go to Chick-fil-A, chains might strategize and say, we want 80 of them to go to Chick-fil-A and 10 to go to us. McDonald’s likely won’t be losing anything by coming out with a competitive new chicken option — if anything they’re increasing their chances of reaching customers, any customers, no matter what.”

Fri Feb 26 , 2021
Crispy on the outside and gooey in the middle, mozzarella sticks are the ultimate restaurant appetizer, if you ask me. But TikTokers are testing my snack loyalty by air frying mini Babybel cheese wheels coated in a crunchy Doritos crust, and the results are cartoon-level ooey gooey. The recipe involves […] 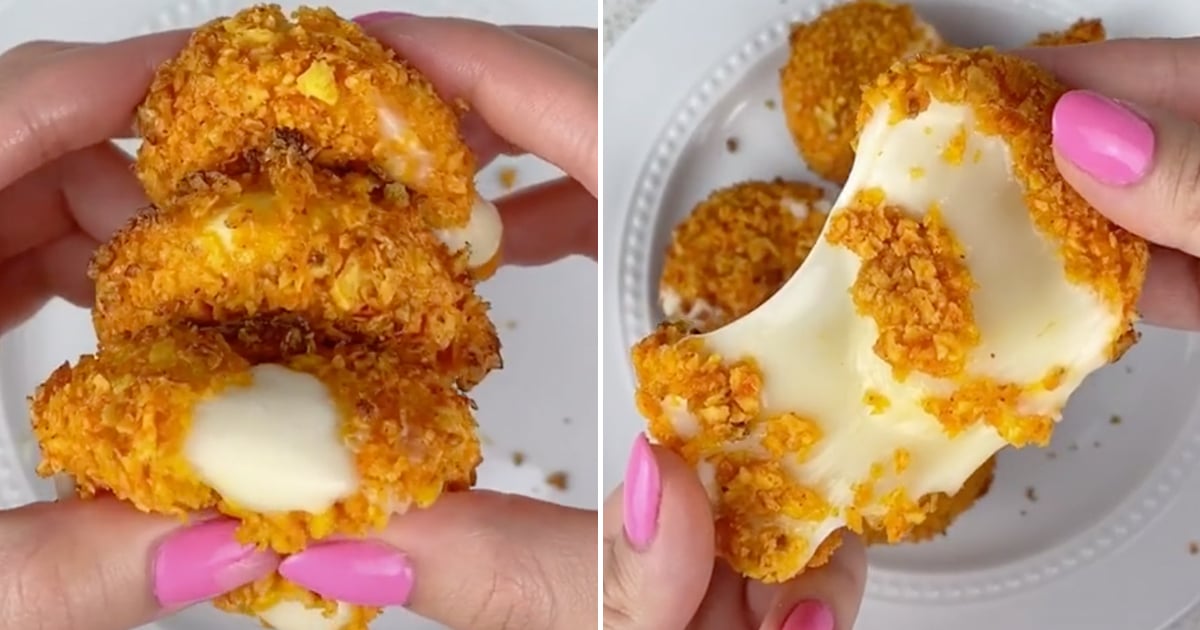