A McDonald’s worker has been branded the ‘worst employee ever’ after claiming he lifted the lid on the fast food chain – appearing to make ‘half eaten’ burgers and deliberately ‘ruining’ food with too much sauce or pickles. The TikTok user, who is believed to be from the US and […]

A McDonald’s worker has been branded the ‘worst employee ever’ after claiming he lifted the lid on the fast food chain – appearing to make ‘half eaten’ burgers and deliberately ‘ruining’ food with too much sauce or pickles.

The TikTok user, who is believed to be from the US and is known only as @mikky.d0, has racked up more than 3million views since February by filming himself and colleagues at work in one of the food giant’s stores at an unknown location.

In one video viewed more than 1.8million times, the male worker, shows a Bacon McDouble with the bottom beef patty missing a chunk and the caption ‘we got a little hungry’.

Meanwhile other clips show staff members piling huge handfuls of pickles on a burger that asked for extra pickles and drowning other food in ‘extra’ sauce.

In one shocking clip, which quickly went viral, the worker, showed off the meat with a significant chunk missing before covering it with a slice of cheese and the remaining ingredients, wrapping it up and sliding it towards the serving counter.

Enraged viewers interpreted this to imply the burger had been half eaten and were quick to blast the account saying ‘you need to be jailed if that’s real’ and ‘not in a pandemic WHAT’.

While some were quick to claim the burger with a ‘bite’ missing was a joke and hoped those involved were ‘not gonna actually give it to somebody[sic]’, others slammed it as ‘not even funny’ and questioned why the staff had not been ‘sacked’.

One person wrote: ‘People getting real bold forgetting the girl that licked ice cream in Tesco got 4 years in jail.’

One person wrote: ‘In a pandemic, you are getting fired 100 per cent.’

A third said: ‘This man is the worst employee I’ve ever seen.’

When one person questioned what the charges would be for such a stunt, the worker claimed it would be nothing as the staff member filmed implied the video was a joke.

In another clip where a customer requested extra tartar sauce on their Filet-o-Fish, footage showed staff overloading both buns with copious amounts of the condiment.

Followers slammed it as ‘disgusting’ after the employee squirted five hefty portions of the sauce on one meal before adding seven to another.

A TikTok user, who is believed to be male and from the US, has been going viral online after appearing to share the secrets from inside McDonald’s kitchens 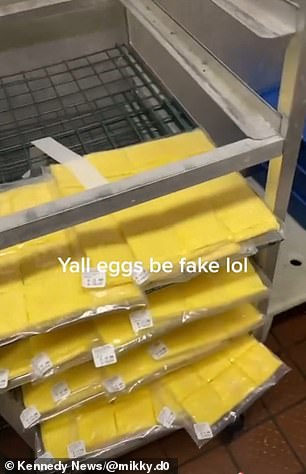 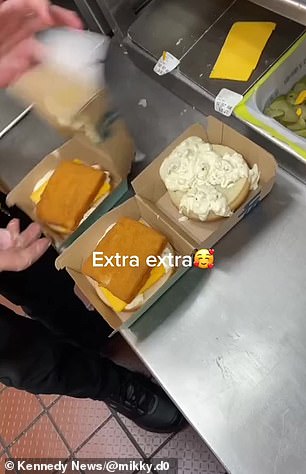 Clips show staff members piling huge handfuls of dozens of pickles on a burger that asked for extra pickles and drowning other food in ‘extra’ sauce (right), while he also showed off the company’s ‘fake’ eggs (left)

One commenter said: ‘Why do yall gotta make others ppl day s***ty.’

Another wrote: ‘That’s just madd disrespectful and would be p***ed if someone did that too u[sic].’

However a different clip showed him responding to a question from a viewer asking ‘are the ice cream machines actually broken’ by showing the machine working and stating: ‘It works, we just don’t like making them.’

One video left viewers horrified as the worker went into what appeared to be a McDonald’s fridge where he showed off flat sheets of ‘folded eggs’ in plastic wrapping waiting to be warmed up – leaving commentators branding it ‘nasty’.

The clip, which has the caption ‘yall eggs be fake’, shows the employee enter the store’s walk-in fridge and show off a vacuum-packed bag of folded eggs, pre-mixed and waiting just to be heated up. 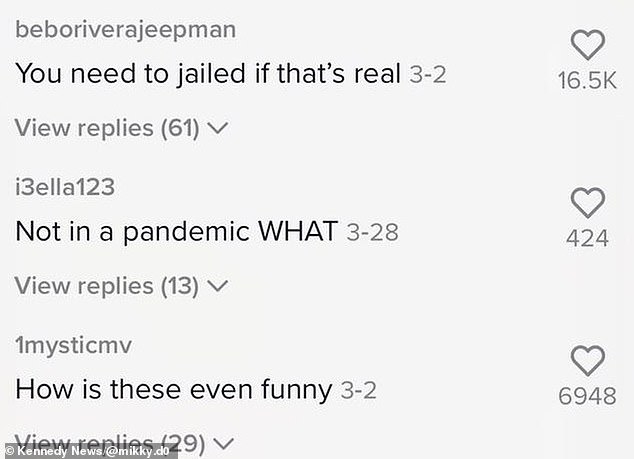 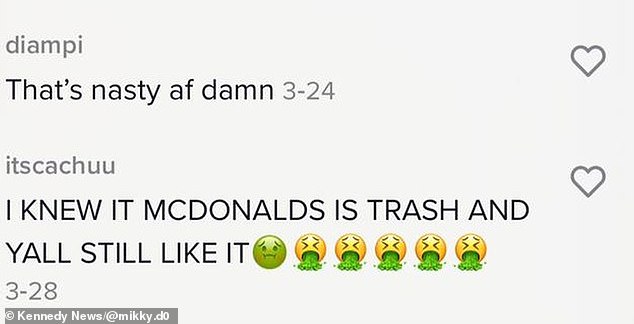 Many TikTok users were revolted by the video clips, with many calling the revelations ‘nasty’ and questioning if the videos could be a joke

One commenter wrote: ‘I knew it McDonalds is trash and yall still like it[sic].’

One person commented: ‘That why it taste like sponge[sic].’

A UK spokesperson for McDonald’s said: ‘To be clear, this video is not from the UK & Ireland market but rather seems to be from the US.’

McDonald’s US confirmed they were ‘actively investigating’ as the food prep in the burger video did not meet the ‘robust food quality and safety standards’ they have in place.

The company said that all the eggs they serve in their restaurants ‘start with real egg’ but that omelette-style eggs are made in suppliers’ kitchens before arriving at their restaurants in frozen form for a ‘consistent shape’.

Commenting on the ice cream machine clip, McDonald’s explained that the machines undergo regular cleaning, which ‘may result in customers experiencing a longer wait time or soft serve machines that were unavailable’.

The company said they are consistently working with franchisees to improve and enhance the restaurant experience so customers ‘can purchase the sweet treats they enjoy from their dessert menu where and when they want it’.

Wed Apr 7 , 2021
Another TikTok recipe has stolen my heart, and this time it’s in the form of crispy, salty potato disks. Potatoes are a versatile ingredient that can take many forms, ranging from whipped into a creamy mash to being crinkled and fried. And while all potato iterations are delicious in their […] 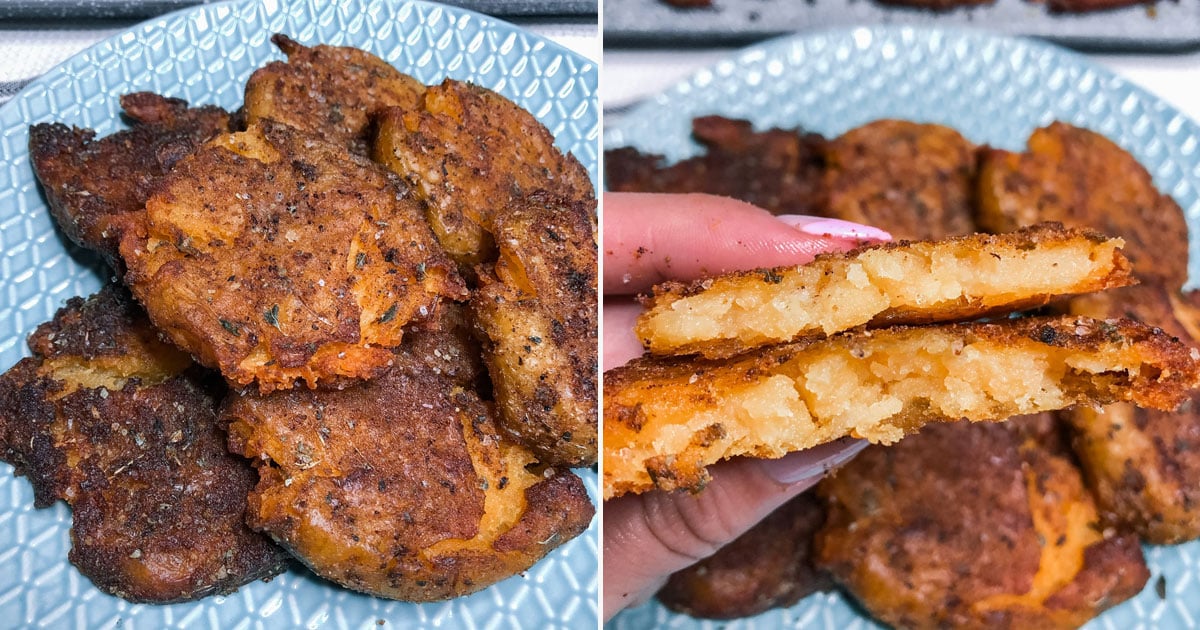